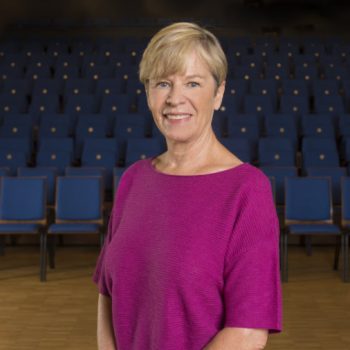 Debbie Muir is co-founder of Great Traits, a company known for its APPLIED High-Performance Leadership training programs.  Debbie has taken her unique winning coaching experience within the Olympic movement and, with partner Mark Tewksbury, written The Great Traits of Champions and created the Corporate Champions Program.  An Education graduate from the University of Calgary, Debbie brings her rich experience in program and curriculum design to all Great Traits programming.  Debbie also created the Great Traits Achiever, Leader and Legacy Assessments.

Debbie’s Olympic involvement includes coaching her synchronized swimming athletes to seven out of a possible nine world championship titles, 2 Olympic gold and 2 Olympic silver medals.  She was named by the Coaching Association of Canada as one of the top-ten all-time coaches in Canadian history, the only woman to receive this remarkable distinction.  Debbie also worked as a high-performance advisor with Own the Podium and conducted performance reviews for many of Canada’s top performing sport organizations.